The New York Times: Qatar Finds a Currency of Its Own: Natural Gas: "Andrew Brown, Shell's country manager in Qatar, said that greater natural gas and oil production should result in overall daily energy production equivalent to about 5 million barrels of oil a day by early in the next decade, nearly half the daily oil output of Saudi Arabia.": Thursday 22 December 2005

DOHA, Qatar - "This was a sleepy little town when I moved here eight years ago," said Mohamad Moabi, from an office overlooking the turquoise waters alongside this city's crescent-shaped corniche, where dozens of half-built skyscrapers are going up. "Now it's on the frontier of the global economy." 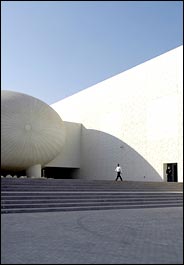 Qatar's capacity to ship liquid natural gas around the world has provided money for a medical school. 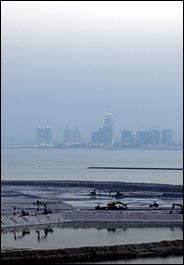 The Pearl, a complex for 30,000 residents, is under construction in Doha. Neighborhoods will evoke parts of Monaco, Marrakesh and Venice.

Drawing on a cigarette as he gestured northward, Mr. Moabi, 44, the Lebanese-born chief economist at Qatar's largest bank, pointed to why this tiny emirate, no bigger than Connecticut, is elbowing aside other energy-rich countries to become the leader in the emerging international market for natural gas.

"It helps," he said, "when you have a natural gas field up there that can be extracted for about a century."

In a shift that has drawn historical comparisons to the ascent of Saudi Arabia's oil industry several decades ago, Qatar has moved swiftly in recent years to develop its huge offshore natural gas reserves - once dismissed as practically worthless because of the difficulty of transporting gas to distant markets - while cementing strong military and economic ties with the United States.

Driven by an ambitious, reform-minded ruling elite, these moves have allowed Qatar to leap ahead of Russia and Iran, the only nations with larger reserves of natural gas, seizing new opportunities to export the fuel to markets in North America, southern Europe and the Far East.

Tankers laden with gas supercooled to liquid form already depart each day for Japan and South Korea from the northern port of Ras Laffan, not far from Al Udeid Air Base in the Qatari desert, the American military's main air operations center in the Arabian Peninsula. Soon the ships will start delivering their cargoes to ports in Texas and Louisiana in the most ambitious project to date to bring natural gas from the Middle East to American consumers.

These plans, which would help transform the United States into the largest importer of liquefied natural gas, have created some unease at a time when American reliance on oil from the Middle East is still unabated. Even as the Organization of the Petroleum Exporting Countries tries to strengthen its grip on world oil markets, Qatar has moved to exert greater influence over the trade in natural gas through the creation of the Gas Exporting Countries Forum.

With a liaison office in Doha, the group's 12 members, including Algeria, Indonesia and Venezuela, control more than 70 percent of the world's gas reserves and more than 40 percent of production. Though in its infancy, the organization has been likened to OPEC in its early efforts to control oil prices, an aspiration that officials here contend is not under consideration.

"Natural gas is not as flexible a commodity as oil and is sold in longer-term contracts," Abdullah bin Hamad al-Attiyeh, Qatar's energy minister, said in an interview. "The purpose of the forum is to exchange information. We don't believe in confrontation with our consumers."

Indeed, Qatar's ability to emerge as the world's leading producer and exporter of liquefied natural gas, with plans to produce 77 million tons of the fuel by the start of the next decade, depends on cooperation. It is working with Western energy companies and Asian shipping concerns in the construction of an immense industrial complex in Ras Laffan near the maritime border with Iran, about an hour's drive through the scorching desert north of Doha.

"We're building what might be the largest plant facility anywhere in the world," Wayne A. Harms, the president of operations in Qatar for Exxon Mobil, the largest foreign investor in the country, said in an interview.

"It's happening in a very fast, almost unprecedented period of time," Mr. Harms said, describing the frenzied activity of more than 50,000 workers, largely from India and Pakistan, toiling to build the complexes needed to condense natural gas so it can be shipped across the sea.

It has been just a decade since the emir, Sheik Hamad bin Khalifa al-Thani, overthrew his father in a bloodless coup, strengthening ties with the United States and betting on an offshore natural gas reserve of 900 trillion cubic feet - the world's largest purely natural gas reserve, called the North Field - that it shares with Iran.

That shift gave Qatar, long a marginal oil producer, a commodity to help it escape the Saudi orbit and the wealth to plot its own path to prosperity.

The North Field, discovered by Royal Dutch Shell in 1971 and considered useless at the time because it had no oil and its natural gas was difficult to transport, is now described by some geologists as the second-largest petroleum deposit in the world after the Ghawar oil field in Saudi Arabia.
Skip to next paragraph
Enlarge This Image 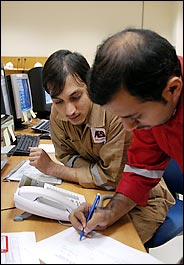 Technicians at work at the Ras Laffan Power and Water Plant in Ras Laffan Industrial City located on the northeast corner of the Qatari peninsula.

And in an interview at an ornate receiving room at the headquarters of Qatar Petroleum, Mr. Attiyeh, the energy minister, said he expected to see some $100 billion invested in the country through the end of the decade. That cash injection is fueling economic growth estimated at 25 percent in 2004 and 29 percent this year, before adjusting for inflation, according to Qatar National Bank. As a result, after languishing for much of the last century as a sleepy British protectorate, Qatar is surging in population, up almost 50 percent since 1997, to an estimated 750,000 in 2004, a number that is expected to grow by an estimated 100,000 this year. (Fewer than 200,000 people in the country are believed to be Qatari citizens.)

The surge, led by an influx of poor Asian laborers and large numbers of Americans and European professionals lured by tax-free salaries, has left a shortage of housing and office space. Rents in parts of Doha, its streets clogged with new sport utility vehicles and the occasional Rolls-Royce or Maserati, have climbed almost 50 percent this year.

"I sometimes feel like I'll live with my family forever," said Abdalla Eisa Rasheed, 24, a Qatari technician at a water desalination plant operated by the AES Corporation of Arlington, Va. Mr. Rasheed, one of six siblings, said two older brothers, both married with children, also lived under the same roof. "There's the positive and the negative of the economy," he said.

Not surprisingly, the remaking of Doha is creating a bonanza for international infrastructure companies. Bechtel of San Francisco won a $2.5 billion contract to build an airport designed specifically for the Airbus A380-800, the world's largest passenger aircraft.

Near neighborhoods where goat herders can still be glimpsed tending their flocks, projects include an Islamic Museum designed by the Chinese-American architect I. M. Pei and a photography museum by Santiago Calatrava of Spain.

The Japanese architect Arata Isozaki was commissioned to design a national library, after the construction of his futuristic medical school, operated by the Weill Medical College of Cornell University in Qatar's newly named Education City, a collection of colleges run by administrators and faculty from Texas A&M, Georgetown University and Virginia Commonwealth University.

Far more numerous are brazen projects without marquee architects, like The Pearl, a planned complex for 30,000 residents, with neighborhoods meant to evoke parts of Monaco, Marrakesh and Venice. In one area, intended to emulate New York, pedestrians can stroll on an avenue called Broadway away from the din of Doha's streets.

Not far away sits a dusty work site where workers are feverishly building what is expected to be Doha's tallest skyscraper, an 80-floor complex called the Dubai Towers. With about 30 skyscrapers in various stages of completion, the description of Doha as the "next Dubai," a nod to its flashier neighbor on the Arabian Peninsula, is inevitable here.

Still, there is a fundamental difference between the two emirates. Dubai has turned to dream-world architecture and tourism to prepare for the not-so-distant day when its oil runs out; Qatar, its coffers swelling from natural gas sales, shows little sign of contemplating an economy not reliant on energy exports.

Andrew Brown, Shell's country manager in Qatar, said that greater natural gas and oil production should result in overall daily energy production equivalent to about 5 million barrels of oil a day by early in the next decade, nearly half the daily oil output of Saudi Arabia.

"Over the next five years," Mr. Brown said, "Qatar is going to see an energy boom as significant as any other in the past."

Few in Qatar worry that the natural gas frenzy will fizzle anytime soon, despite predictions from some analysts that natural gas prices in countries like the United States and Britain could fall sharply by 2007 or so as large amounts of liquefied natural gas reach the market.

Still, the torrid expansion at Ras Laffan, as well as Qatar's increasingly interdependent relations with the United States and other gas-importing nations, has created some unease within the prosperity bubble. In an attempt to clamp down on rising infrastructure costs, the government earlier this year unexpectedly imposed a moratorium on new gas export projects.

Perhaps most troubling to the relatively cosmopolitan society taking shape in Doha, an Egyptian employee of Qatar Petroleum exploded a bomb last March during a performance of Shakespeare's "Twelfth Night" at a theater in a district where many Western expatriates live.

The blast killed a British man and wounded 12 others. Authorities and executives from foreign energy companies described the incident as an isolated act, by an individual extremist.

And yet the offices at Shell can be reached only after passing through thick steel protective doors. Exxon Mobil's executive suite in Doha does not even have a sign on the door, camouflaged by the name of an obscure Qatari company with which Exxon shares an old building.

For all the caution, little seems to be standing in the way of Qatar becoming even richer. One of the country's leading newspapers, The Peninsula, noted recently that Qatar was already the third-wealthiest country, with per capita income of $38,241 in 2004, trailing only Switzerland and Luxembourg.

"I hope some of the money reaches down to me," said Mohammad Omer Mohammad, 25, who despite being born and raised in Qatar, remains by law a citizen of the homeland of his parents, Pakistan. Mr. Mohammad, who works at a modest job at an immigration office in Ras Laffan, still cannot own land in Qatar but aspires one day to be rich.

"The economy's good, I guess," Mr. Mohammad said. "But it could be better."