The New York Times: At Time of Epic Storms, Oil Industry Thinks Anew: "Shell said its output - which usually amounts to 450,000 barrels a day, or nearly a third of the gulf's oil production - would be down 40 percent until next year.": Thursday 15 September 2005

Around the world, offshore oil and gas platforms are generally built to survive without serious damage a so-called 100-year storm - a hurricane so powerful that it typically occurs only once every hundred years. 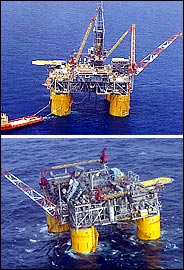 The Mars tension-leg platform owned by Shell before Hurricane Katrina, top, and afterward. It is expected to be out of operation for months.

Hurricane Ivan roared through the Gulf of Mexico a year ago, generating the highest waves ever recorded there in a storm considered likely to occur only once every 2,500 years. Given the scale of the hurricane, it was inevitable that it would wreak havoc in the gulf, America's biggest energy-producing region, uprooting miles of underwater pipelines, destroying platforms and crimping production for months.

But when industry officials, engineers and oceanographers gathered at an American Petroleum Institute conference in Houston in July to discuss ways of improving the gulf's infrastructure, they expected to have plenty of time to work on the problems. Then Katrina struck.

"We're seeing more 100-year events happening more often, even every few years," said Jafar Korloo, who has designed, engineered and managed offshore platforms for Unocal, the oil company recently acquired by Chevron. "The bar has to be higher."

The stakes, too, are higher than before. Older production basins in Texas and Oklahoma have been on a gradual decline for years; some potential oil-producing regions on land elsewhere in the United States are out of bounds.

In the meantime, more oil and gas has been gushing out of the gulf, which was first tapped half a century ago, amounting now to nearly a third of domestic output. And the bulk of that production is concentrated at no more than a couple of dozen platforms, each costing $1 billion to $2 billion.

As the petroleum industry confronts the challenge of recovering as quickly as possible from Katrina, officials are just beginning to assess the bigger, longer-range questions. But clearly, they cannot count on nature being predictable.

"Most definitions of a 100-year event were calculated before Ivan and Katrina," said Bob Hamilton, a vice president at the Woods Hole Group, an ocean engineering group in Massachusetts. "At this point, are the 100-year criteria good enough?"

Hurricane Katrina cut deeply into oil and gas production, shut down major refineries, sent gasoline prices to record highs and set off fears of an energy crisis. Oil companies, just as they did after earlier devastating gulf storms - Betsy in 1965, Camille in 1969, Ivan in 2004 - are rethinking how they operate offshore. But now they are asking themselves tougher questions.

"We've never seen anything like Katrina," said Tim Sampson, one of the July conference organizers and the coordinator for drilling and production operations at the petroleum institute. "We have to consider the data and look at whether we need to update our standards."

According to the Coast Guard, Katrina destroyed, damaged or sank about 50 of the 4,000 gulf platforms.

When it passed over the gulf's crowded waters, Katrina was at its peak, a Category 5 storm, the most powerful on the Saffir-Simpson scale. Winds of 175 miles an hour snapped mooring lines, sending some platforms adrift. Waves toppled steel structures, and underwater slides shifted the ground under pipelines, probably causing widespread damage that has yet to be fully assessed.

Four installations owned by Royal Dutch/Shell, the gulf's largest operator, suffered extensive damage. These included the biggest offshore facility in the region, a tension-leg platform called Mars, which is expected to be out of commission for months after being shaved by the hurricane's winds and waves.

Shell said its output - which usually amounts to 450,000 barrels a day, or nearly a third of the gulf's oil production - would be down 40 percent until next year.

At its peak, the hurricane caused nearly the entire gulf oil region to be shut down. A few days before Katrina struck, oil companies closed off wells, evacuated the platforms and stopped production as a safety precaution. From daily output of 1.5 million barrels a day, the region is now producing an average of 650,000 barrels a day, according to the Interior Department.

But since Aug. 26, when the platforms were shut down, 20 million barrels of oil production has been lost, the equivalent of a day's consumption for the United States. The loss in natural gas production, now back at 65 percent of its level before the storm, was 99 billion cubic feet.

Despite the damage, many oil experts said that most of the offshore infrastructure fared remarkably well. All the platforms that were destroyed were old and antiquated structures, some built in the late 1960's and producing little oil. The newer platforms, including Shell's, did not suffer catastrophic structural damage. After lengthy repairs, the company expects Mars to resume full production.

Moreover, the facilities offshore survived the storm better than those onshore. Because of flooding in coastal Louisiana and Mississippi, it will be months before a handful of major refineries and gas-processing facilities are brought back online.

Offshore, though, about 30,000 workers were safely flown out. While there is much to repair, most of the platforms and rigs that operate at sea suffered relatively little major damage.

"That's an absolute story of success," said Dan Orange, chief executive of AOA Geophysics, a consulting firm. "You can do the best engineering in the world, but nature might still throw a curveball at you."

Specialists are more worried about the state of the underwater pipeline network. Totaling 33,000 miles, the grid turned out to be the weakest link after Hurricane Ivan, which produced mudslides that snapped pipelines, shifted parts around and caused long delays and repairs before production could be resumed.

Engineers have known about the ravages caused by mudslides at the mouth of the Mississippi Delta since at least 1969. That was the year Shell's South Pass 70 platform was destroyed by mudslides set in motion by Hurricane Camille. The destruction of the platform, which was brand new, shocked the industry and led to the development of structures with foundations as deep as 600 feet, well below the mud line.

But pipelines are a different matter, said Jim Hooper, an experienced geotechnical engineer and senior consultant for Fugro McClelland Marine Geosciences, who compared the seabed in some coastal areas to gelatin stretching at depths of 300 feet.

"Eventually, the waves get big enough and the Jell-O fails," said Mr. Hooper, a pioneer of the mudslide-resistant platforms.

Given that phenomenon, he said, pipelines cannot be easily buried. Most are simply laid on the unstable seabed or submerged somewhat to avoid fishing trawlers. To prevent oil spills, they are designed with breakaways and valves that shut off automatically when the ground shifts. The trick then is to find the parts and quickly snap them back together.

"What it comes down to is that pipelines are fragile and failures will occur," Mr. Hooper said. "The industry has learned to repair as fast as possible."

With larger quantities of oil coursing through some major pipelines, more costly solutions are now being considered, including burying the largest pipes well below mudslide-prone regions or diverting around them.

But the biggest uncertainty is in the 100-year storm criteria followed by the industry. With more powerful storms occurring more frequently, the question is how to update certain design standards, like the height from the surface of the water to the lower deck of a platform. The greater the distance, the bigger waves that can be cleared during a storm.

In the 1960's, recommended deck heights - or the "air gap" in industry jargon - were 35 feet. Today, the most common recommendation is 55 feet.

But even that proved insufficient with Hurricane Ivan. Chevron's Petronius platform was hit by a wave estimated at 90 feet from crest to trough. Its impact caused extensive damage requiring the installation to be shut down for six months for repairs. The industry is feeling the strain.

Hurricanes come in phases that alternate between quieter periods and more active seasons. Since 1995, the Atlantic has been in a period of stronger hurricanes that might last 10 or 15 years more, according to the National Oceanic and Atmospheric Administration.

"The last active period was in the 1960's," said Charles Watson, president of Kinetic Analysis, which models the impact of hurricanes on the gulf's production. "People have been lulled by a period of inactivity."

But as with most debates over climate, there is little consensus on whether this means that hurricanes are becoming fiercer or whether global warming has had an effect. One thing, though, seems certain: with the global oil industry operating flat out, there is almost no margin for error.

"Life is getting complicated in the gulf," said Joe Suhayda, a coastal oceanographer formerly at Louisiana State University, who now works as an oil industry consultant. "The industry has to address the environmental risk. If I am going to build a platform, I have to look at the risk of that facility being destroyed by nature."