The New York Times: Refineries and Rigs Shut Down for Storm: Thursday 22 Sept 2005

Energy companies stepped up evacuations of offshore operations and rushed to secure refineries on the Texas coast yesterday as they prepared for Hurricane Rita, which was upgraded to a Category 5 hurricane packing winds up to 165 miles an hour. The storm appeared to be headed for the heart of the nation's oil industry. 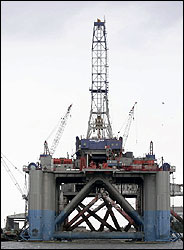 An oil drilling platform was at the Port of Galveston in Texas for repairs this month. As of Wednesday, companies had evacuated more than half their platforms and rigs in the Gulf of Mexico as Hurricane Rita neared.

With traders uncertain where the full fury of the hurricane might fall, oil prices moved higher but closed below their peaks for the day. The stock market also took a blow yesterday, with the Dow industrials falling more than 100 points, to 10,378.03, while the Standard & Poor's 500-stock index declined by 0.91 percent, to 1,210.20.

After being hit hard by Hurricane Katrina just three weeks ago, the energy industry could face a far greater test if Hurricane Rita causes extensive damage and shutdowns along the Texas coast. How much worse the situation could be, industry experts said, will depend on exactly where the hurricane makes landfall, how strong it is when it does, and how quickly electricity, telephones and other basic services can be restored.

The storm could also have serious economic and environmental consequences for chemical manufacturers on the Texas coast. More than 160 plants in Texas are in the potential path of the storm, according to the American Chemistry Council. Roughly half the nation's chemical-production capacity is in the region.

Texas is home to 26 refineries, representing more than a quarter of the nation's crude oil processing capacity. Of those refineries, 17 are in cities along the coast.

By comparison, Katrina initially disabled about 10 refineries in Louisiana and Mississippi, accounting for 10 percent of the nation's capacity. Roughly half of that output remains out of service.

BP and Royal Dutch Shell said they were shutting refineries that together process 770,000 barrels of oil a day, or 4.5 percent of domestic capacity. And Exxon Mobil said it was moving nonessential employees further inland from its Baytown plant, which processes 557,000 barrels a day.

"The potential impact is much more serious," said Kenneth M. Stern, a managing director at FTI Consulting in New York. "We all sort of hope that Rita is not as strong as Katrina, but if you put them on an equal basis you are talking about nearly three times the amount of refining capacity that is at risk."

The National Hurricane Center said that Hurricane Rita was expected to land as at least a Category 3 storm on the Texas coast between the Mexican border and western Louisiana by the weekend. Officials in Galveston, the island city 50 miles southeast of Houston, ordered a mandatory evacuation.

"The farther south it hits, the better it is as far as petroleum and gasoline are concerned," said Robert S. Linden, a managing consultant of the PA Consulting Group in Washington.

Like Hurricane Katrina, Hurricane Rita's biggest impact on the energy sector will probably be felt at refineries, the industrial workhorses that boil and pressurize crude oil in dangerous conditions to produce gasoline, diesel and other fuels. The nation's refineries have been running at or near capacity all year.

After Katrina disrupted refineries and pipelines that deliver Gulf Coast fuel to the eastern half of the country, retail gasoline prices soared past $3 a gallon in many cities, a situation that could recur after Rita. Yesterday, the national average retail price for a gallon of regular unleaded gasoline was $2.764, down slightly from $2.788 but still higher than the $2.613 a month ago and $1.859 a year ago, according to AAA.

One fuel distributor in Atlanta said wholesale prices were holding steady for now, but retailers and large commercial customers appeared to be ordering larger supplies for delivery in the coming days in anticipation of shortages.

"We are seeing a huge amount of demand in terms of people trying to top off their retail outlets and their terminals and tanks," the distributor, Tex Pitfield, president and chief executive of Saraguay Petroleum, said. "The product is readily available for the most part, but nobody has the trucks."

Analysts say that even if Hurricane Rita does not devastate refineries, their shutdown will make tight supplies even scarcer.

"Even if you restart on Sunday, it's going to be two, three or four days before they are fully operational," said Thomas Bentz, an analyst at BNP Paribas. "Can we afford to have that much supply out of the market? It doesn't seem that we can."

Soaring retail gasoline prices after Hurricane Katrina led to numerous calls for investigations into allegations of price gouging. The Federal Trade Commission has started an investigation, as required under a energy law adopted this year.

"I don't know we have seen any evidence of manipulation," John H. Seesel, an associate general counsel for the commission, said in a telephone interview. "But that's what the investigation is meant to find out."

Whether Hurricane Rita leads to the kinds of price spikes and spot shortages seen earlier this month could depend greatly on consumers.

After falling for the first two weeks after Hurricane Katrina, demand for gasoline rose 2.1 percent in the week that ended Sept. 16, according to the Energy Information Administration.

In one encouraging sign, gasoline inventories rose 1.8 percent, to 195.4 million barrels, slightly above where they were before Katrina struck, indicating that imports and domestic refineries have been able to make up some of the lost production.

As for offshore facilities, energy companies shut 73.1 percent of oil production yesterday, up from 58.5 percent on Tuesday, and 47.13 percent of natural gas production, up from 34.8 percent, according to the Interior Department. The companies also evacuated more than half of their platforms and rigs in the Gulf of Mexico.

Those numbers will rise as energy companies move workers off platforms and rigs in phases, evacuating those farthest east and closest to the storm first before moving to platforms closer to shore.