The New York Times: Gas Stations Violated Pricing Law, New Jersey Says: "Complaints were filed against stations selling Citgo, Hess, Shell and Sunoco brands, as well as their suppliers. In some cases, Mr. Harvey said, stations were said to have raised prices four or five times in one day...": "Companies that prey on hard-working families through fraudulent practices should feel the full force of the law.": Tuesday 27 September 2005

NEWARK, Sept. 26 - Attorney General Peter C. Harvey charged in state court on Monday that 20 gas stations in New Jersey and the oil companies that supplied them violated state fuel pricing and consumer laws by raising their prices more than once in a single day during the recent run-up in gasoline prices. 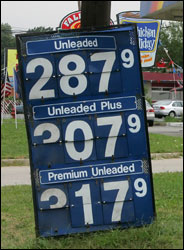 Some stations illegally raised prices multiple times in a day, the state contends.

The civil action makes New Jersey the first state to take legal action in response to the growing anxiety over suddenly and steeply rising gasoline prices. According to oil industry and public policy analysts, New Jersey is the only state to have a law barring multiple price increases on gasoline in a 24-hour period.

Complaints were filed against stations selling Citgo, Hess, Shell and Sunoco brands, as well as their suppliers. In some cases, Mr. Harvey said, stations were said to have raised prices four or five times in one day as the commodities markets raged because of Hurricane Katrina. They were charged with defrauding consumers by raising the prices in violation of state law.

But some were also accused of charging credit card users more than the face value on their receipts, and of selling regular gas in place of premium.

Acting Gov. Richard J. Codey, in announcing the lawsuits late Monday afternoon, said: "Companies that prey on hard-working families through fraudulent practices should feel the full force of the law. Katrina was a devastating hurricane, not a financial windfall for the shameless."

In interviews, some of the owners of the stations cited by Mr. Harvey said they did not know about the state law against changing prices more than once in a day. Others said they had been scrambling to stay afloat as wholesale prices rose, leaving them no choice but to raise prices. A station owner who was not cited, who said he was aware of the law forbidding multiple price changes in a 24-hour period, said he chose to close rather than break the law.

That owner, Paul Riggins, who operates and supplies more than a dozen stations in South Jersey from Wildwood to Trenton, said that on Sept. 2, "by the time one of our trucks got to the refinery, the wholesale price had risen higher than my pump price, so I closed my Wildwood station down four hours early."

New Jersey's law against multiple-price increases in a single day dates to 1938. An antitrust measure, it was meant to protect small operators from the price wars and predatory pricing engaged in by stations owned by large oil companies.

Eric DeGesero, the executive vice president of the Fuel Merchants Association of New Jersey, said the same law also prohibited stations from selling below their actual costs. But that provision was suspended by the state's Division of Consumer Affairs on Sept. 1, he said, because officials recognized that it was inevitable for stations to sell at a loss at some point during the period of concern about supply that followed the hurricane.

In much of the country, state officials have addressed concerns about rising gas prices by freezing or rolling back state taxes on gasoline, said Kate Burke, an energy policy specialist with the National Conference of State Legislators. But New Jersey was unique, she said, in having the law forbidding more than one price change in 24 hours.

John Maxwell, the associate director of the New Jersey office of the American Petroleum Institute, which represents the 3,500 independently owned or oil company-operated stations, said only a few of his group's members had been cited.

"We know what the law is, and we oppose price gouging of any kind," Mr. Maxwell said.

But Fred Murad, the owner of Ridgedale Sunoco in East Hanover, a station cited by the attorney general in court papers, said he was not aware of the law. He said he tried to hold the line on prices, but after two days of sailing against a tide of wholesale increases that exceeded 33 cents a gallon, he gave in; raising prices three times in a single day. That occurred on Labor Day weekend, when state investigators were monitoring some 400 stations.

Michael Price, the manager of Clifton Sunoco on Route 3 in Clifton, said he, too, did not know about the law. But either way, he said, he adjusted prices at the direction of his supplier.

If the courts find in favor of Mr. Harvey's office, the stations and suppliers face fines of $50 to $200 under the price change violations - penalties that have not changed since 1938, said the attorney general. But under the consumer fraud charges covering the same practices and others, they face fines of $10,000 for the first offense and up to $20,000 for subsequent violations.