HOUSTON, Sept. 25 - As they pulled into the Shell station just off Interstate 45 on Sunday, Ta and Rachel Samuel were feeling hugely relieved.

They had found an open gas station and were almost home after making the return trip from Dallas, where they had fled as Hurricane Rita approached the Texas coast. The 220-mile drive north on Thursday took the Samuels an excruciating 30 hours, as an estimated 2.5 million residents evacuated the region. 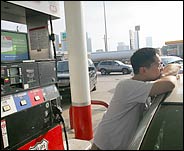 Jerry Huang, who had just returned to Houston from San Antonio, waited to fill up his car Sunday after a gas station received more fuel.

Hurricane Rita's Path
The storm brought winds of over 100 miles per hour to parts of Louisiana and Texas.
• New Orleans Update

HOW TO HELP A partial list of relief organizations and other information on the Web.

YOUR STORY Share your experiences via e-mail or in this forum.

"There's not much traffic today," Mr. Samuel said jubilantly, not seeming to mind paying $2.69 for a gallon of gas. "It only took five hours to get back from Dallas today, although the last mile or two were slow."

With Houston largely spared by Hurricane Rita, the big question here this weekend has been whether there would be a repeat of the extraordinary traffic jams that drivers faced as they fled last week. Vehicles had inched along so slowly that many drivers ran out of gas, further aggravating the traffic.

Fearing that most people would return this weekend, Mayor Bill White of Houston urged residents not to rush back. He asked businesses not to call their employees to work on Monday and Tuesday, and he repeatedly assured parents that schools in Houston, the nation's fourth-largest city, would be closed those days.

Mr. White also warned that returning might be unwise because it could be hard to find gasoline at stations along the highways and some neighborhoods in the city were still without power.

On Sunday, Judge Robert Eckels, the top elected official in Harris County, which includes Houston, reiterated the mayor's message: "If you're not in a big rush and have a place to stay, then stay an extra day or two."

Texas officials devised a staggered plan that called for evacuees from northwest of Houston to return on Sunday, those from the southwest to return on Monday, and others on Tuesday.

Many Houston residents, however, ignored the instructions, and many others said they simply had not heard about them.

Under the state's plan, the Samuels were not supposed to return home until Tuesday. But they said they needed to get back because they ran a day care center and parents might need them on Monday.

Tim Moore, a payroll accountant, said the trip back on Sunday was much easier than the outbound drive on Thursday. It took him, his wife and their three children about 25 hours to drive the 66 miles north to Huntsville. They had hoped to evacuate much farther north, but they gave up and stayed at a shelter in a high school.

"Today, the same drive took just an hour and a half," Mr. Moore said. "The drive on Thursday was terrible, and with the kids, it was especially bad."

Some highways had bottlenecks on Sunday. On Interstate 45 in Conroe, some 40 miles north of downtown Houston, southbound traffic slowed to a crawl for two miles, as the highway narrowed because of construction. Farther north on I-45, another bottleneck occurred when southbound traffic was detoured off U.S. 59 because a loose barge had closed the Trinity River bridge.

"You're looking at an enormous number of people coming back to our area," said Sgt. Bob Berry of the Conroe Police Department. "We're trying to get our message across - there is no emergency right now. They can take their time coming back in."

Judge Eckels said: "The return seems to be working relatively smoothly. We are seeing high traffic levels coming in, but the traffic is still flowing."

With gas in short supply, many drivers embraced the strategy of following fuel tankers. Trabion Jenkins, who drives a gasoline truck, said seven tree-trimming trucks that had traveled from North Carolina to help out in Beaumont followed him for miles before he pulled into a Shell station in Conroe.

"They're all after you," Mr. Jenkins said. "They roll their windows down and ask you, 'Where you going?' They follow you till you get here."

Some tanker drivers are receiving police escorts. Mr. Jenkins said he had been threatened with physical harm, sometimes by drivers who feared that they would lose their place in line when his arrival at a gas station forced them to move, other times by people who demanded that he open the spouts on the side of his truck so they could fill their tanks.

"The police escorts have been very helpful to protect me and to protect against the craziness," Mr. Jenkins said.

On Sunday, Mayor White defended his decision to call for an evacuation of Houston, pointing out that weather forecasts had said the hurricane could score a direct hit on Houston.

"You cannot predict the weather," he said. "Hurricanes move. If you evacuate two or three times and save your life once, that once is enough."