THE NEW YORK TIMES: Voices From the Storm: Staying Behind, to Help a City That Needed Him: Monday 26 September 2005
Published: September 26, 2005

Abe Doumani, an "essential person" by declaration of Mayor Bill White, mopped the floor of his Shell station yesterday at a busy intersection.

While others had evacuated, joining the chaotic exodus of about 2.5 million people who fled Hurricane Rita, Mr. Doumani knew he was too vital a player to leave. 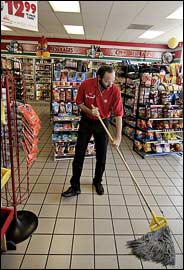 Hurricane Rita's Path
The storm brought winds of over 100 miles per hour to parts of Louisiana and Texas.
• New Orleans Update

HOW TO HELP A partial list of relief organizations and other information on the Web.

YOUR STORY Share your experiences via e-mail or in this forum.

He dispenses that rarest and most prized of all commodities: gasoline.

Mr. Doumani arrived in the United States from Syria 17 years ago and now wears the cherry-red shirt of a Shell operator, with a share in 24 stations across Houston.

Yesterday, the mayor widened the definition of those providing essential city services to include gas station operators and food sellers.

Sure, Houston needed its police officers, firefighters and doctors on the job. But it also needed its Abe Doumanis.

"I've never seen customers so happy to pump gas," Mr. Doumani, 36, said as a motorist who had just filled up, as if on cue, raised his arms in a triumphant signal of "touchdown!" (The driver, Scott Chadwell, 38, a legal assistant, said, "I was on my way to a restaurant and I saw he had gas and I said, 'Let's top off.' ")

Had Mr. Doumani considered himself essential before? "We're not working to be called anything," he said. "We're just doing our jobs."

And that included mopping his floor? "I do whatever it takes," he said.

The last few days took a lot of patience, he said. As Hurricane Rita bore down on Houston last week, setting off traffic jams a hundred miles long on major highways north and west, gasoline dried up throughout the region. Mr. Doumani's station on Kirby Road and Highway 59 was no exception.

But on Saturday afternoon, he got a refill from Shell, becoming one of the first stations in the city to reopen. A line formed at the pumps, with scuffles among drivers arguing over their places. Mr. Doumani called the police. "We got it under control," he said.

He was careful to say that he had not raised his prices through the crisis, by Shell policy. "They told us to charge the same," he said. But the storm damaged credit card equipment at the pumps, requiring all transactions to be done inside. By last night, Mr. Doumani's pumps were empty again.

But not all his customers needed gasoline. A woman piled up more than a dozen cases of beer and soda, paying for them at the counter. Who had the dehydration emergency?

"I'm with ABC News," said the woman, who declined to give her name.