The New York Times: Strangers in the Dazzling Night: A Mix of Oil and Misery: " The World Bank is helping build a gas pipeline that will connect Nigeria to several of its coastal neighbors, creating a wider market in a power-hungry region. But the effort is behind schedule. Shell, Nigeria's biggest oil producer, has said it will not meet the 2008 deadline.": Friday 9 December 2005

EBOCHA, Nigeria - The sun had almost set, and another glum happy hour arrived at One for the Road. Veronica, its proprietor, put out her white plastic chairs and tables, checked her stock of chilled beer and waited for paying customers. There was no need to switch on the lights. Across from her tavern, day and night, burns a ghastly, eternal flame. 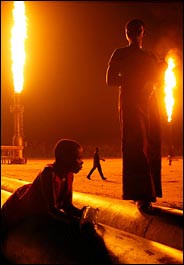 Around the clock, flares burn off excess gas at an Agip plant at Ebocha, in an oil-rich part of Nigeria where people remain impoverished. 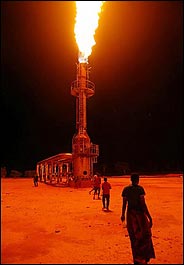 Agip's perpetual gas flare at Ebocha. A Nigerian court ruled such flares violated the rights of nearby residents; they are to be put out by 2008.

"It is always like this," Veronica said, gesturing at the columns more than 200 feet high, with flames that leap and roar from a tangle of pipelines across the road. "Every day, every night. We no get darkness."

Across Nigeria's oil-rich Niger Delta, hellish towers of fire throw an auburn glow, scorching the communities that live under them and sending dark columns of smoke into the sky. They are fueled by natural gas, which is found along with the Bonny Light crude that makes Nigeria the second largest economy in sub-Saharan Africa, after South Africa.

The gas is a highly valuable product used to fuel industry across the power-hungry globe, and Nigeria has more than 600 trillion cubic feet of it, one of the largest reserves in the world. If harnessed and put to use, experts say, Nigerian gas could light the whole continent for the better part of a millennium.

But for decades there has been no way to capture it because oil companies and the Nigerian government, a majority partner in all oil operations here, had not built the infrastructure to make use of it. The market for natural gas inside Nigeria is tiny, and exporting it requires pipelines and other infrastructure that cost billions of dollars to build.

And so for decades it has simply been burned off, or flared. In Ebocha, which is home to an oil plant run by the Italian oil company Agip, the flares have been ablaze since the early 1970's, residents said. Over the years flares have become a blazing symbol of how the Nigerian government and its partners in the oil business have sucked endless wealth from this region, leaving its residents to suffer the environmental consequences of oil extraction while reaping little economic benefit.

That is supposed to change soon. In an effort to eliminate flaring - which environmental activists say takes a heavy toll on the health of people, crops and animals - and exploit this potentially lucrative resource, the Nigerian government is requiring that all flares be put out by 2008 and for gas exports to climb to 50 percent of current oil exports.

Oil companies are furiously building facilities to collect and ship the gas in an effort that will cost $15 billion. Flaring is down to 40 percent of what it was at its peak and the country is exporting 500 billion cubic feet of gas, according to the Nigerian government. The World Bank is helping build a gas pipeline that will connect Nigeria to several of its coastal neighbors, creating a wider market in a power-hungry region.

But the effort is behind schedule. Shell, Nigeria's biggest oil producer, has said it will not meet the 2008 deadline.

Pressure from environmentalists to end the practice is high, and in November a Nigerian court ruled that flaring violated the human rights of people who live nearby.

Just about everyone in Ebocha seems eager to see the flames snuffed, but many people find it hard to imagine this place without them. The flares quite literally define the place: its name means place of light.

Businesses like One for the Road, with its cooler of beer and phalanx of prostitutes, depend on plant workers as customers. Children scamper beneath the fiery glow to collect crunchy beetles that are fried up and eaten as a local delicacy. Over time the town has stretched closer and closer to the plant, and many of the residents are people who came from all across Nigeria to open businesses here because it is the workers who have money to spend. Many young residents have lived their whole lives under the flares.

At One for the Road, Lucky Ekberi and friends gathered around an empty table. Mr. Ekberi, 24, said he could not remember a time when his nights were not illuminated by the flares.

"It is always there," he said, the orange glow reflected in his liquid eyes. "It never goes out. It makes us sick, and many times my eyes are hurt. Crops don't grow well."

Like his friends, Mr. Ekberi describes himself as an "applicant," a euphemism for jobless, because in truth there are few jobs to apply for here. Despite its vast oil and gas reserves, the Niger Delta is perhaps the poorest part of a nation where most people live in extreme poverty.

Mr. Ekberi and a half dozen friends could not afford soft drinks, much less beer, so they sat uneasily at the table, making small talk.

Veronica, who declined to give her last name, cast suspicious glances their way, an unsubtle code to let them know they would have to clear out when paying customers from the Agip plant showed up.

His goal, Mr. Ekberi said, despite the misery of living beneath the flames, is a job at the plant. "Then I could have a good life," he said.

Another of the young men, Ajari Uchenna, a 26-year-old high school graduate, piped up. "I want to be a lawyer," Mr. Uchenna said. Veronica grunted a little laugh.

"A lawyer!" she exclaimed.

"Yes, a lawyer," Mr. Uchenna responded loudly, glaring back at her. "I want to go to university. But I have no money to pay the fees or for lodging," he added softly. "We live with this," he said, gesturing at the flames, "but we don't see any benefit. It is like we are strangers here."

No one else said anything for a while, and soon the Agip workers started arriving. The jobless young men slipped away, off into the bright, bright night.