The New York Times: New Surveys Show That Big Business Has a P.R. Problem: ""This is a challenging time for big corporations," said John D. Hofmeister, who runs the United States operations of Shell Oil Company. The modern feeling, he said, is "big is bad.": "But why the rampant distrust?": Friday 9 December 2005

More than ever, Americans do not trust business or the people who run it.

Pollsters, researchers, even many corporate chiefs themselves say that business is under attack by a majority of the public, which believes that executives are bent on destroying the environment, cooking the books and lining their own pockets. 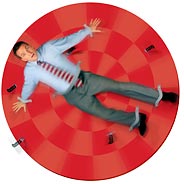 Even as corporate scandals like Tyco's recede, fresh complaints - over high energy costs and soaring oil company profits, planned layoffs in the auto industry, bribery and conflicts of interest in military contracting - fuel the antipathy.

And every report of high-dollar executive compensation - Philip Purcell's $113 million payout to leave Morgan Stanley, James M. Kilts's $165 million for selling Gillette to Procter & Gamble - strengthens the feeling that business funnels money from the workers to the elite. The trial of Enron's former top executives, which begins in January, is likely to renew anger about the scandal that touched off this wave of distrust.

"There is a sense that business is a zero-sum game, that if companies are making a lot of money, it must be coming out of someone else's pocket," said Michael Hammer, a management consultant who writes frequently about business.

Executives ruefully agree with his assessment. "This is a challenging time for big corporations," said John D. Hofmeister, who runs the United States operations of Shell Oil Company. The modern feeling, he said, is "big is bad."

It is not clear whether such views will bring significant change, but it is clear that the disaffection is spreading. In a Roper poll conducted from July 28 to Aug. 10, 72 percent of respondents felt that wrongdoing was widespread in industry; last year, 66 percent felt that was the case.

Nor do Americans expect much help from Washington: 90 percent of respondents to a Harris poll, conducted Nov. 8-13, said big companies had too much influence on government, up from 83 percent last year.

Business is certainly not the only big institution viewed with suspicion. Recent surveys by the Pew Research Center show that a growing number of Americans believe that government is inefficient. And 68 percent of the respondents to the Harris Poll said the news media were too powerful, while 43 percent said unions were too strong. About 35 percent felt even religious leaders had too much power.

But animosity toward executives as a class, not just the institutions they work for, seems to be rising to a new level. "Society has come to believe that the term 'crooked C.E.O.' is redundant," said Robert S. Miller, the chief executive of Delphi, the bankrupt auto parts company.

Perhaps unsurprisingly, some politicians are picking up the antibusiness scent. Representative Barney Frank, a Massachusetts Democrat, recently introduced a bill to require shareholders to approve executive compensation and force companies to take back bonuses that were based on faulty accounting.

"Income distribution in America is seriously out of whack, and there is zero correlation between C.E.O. pay and C.E.O. performance," Mr. Frank said. He conceded that the bill's chances of passage were "bleak" but said he hoped it would "become a factor in the 2006 elections."

Even Republicans have joined the attacks. At a recent Congressional hearing, senators from both parties demanded that oil executives defend their record profits. And now some Senate Democrats, unsatisfied with what they heard, are clamoring for the oil executives to be called back again, this time to testify under oath.

Many executives, while acknowledging the public antipathy, adamantly dispute the criticism. They note that some companies were more helpful than government in the wake of the tsunami in Asia and the Gulf Coast hurricanes. They argue that they are disclosing more financial information, and have cracked down on unethical behavior.

James R. Houghton, chairman of Corning, said he felt little animosity in Corning, N.Y., even though his company had cut thousands of jobs there. "Maybe I'm in an ivory tower, but I think society realizes that 98 percent of businesses are doing the right thing," he said. "The press doesn't write that, because it's the world's most boring story, and because business does a really lousy job of promoting itself."

Business is trying to rectify that. Commercials for Wal-Mart show its employees lauding their benefits and career opportunities. The American Chemistry Council has earmarked $20 million for an education campaign to stress the role of chemicals in daily life. The Business Roundtable has stepped up its corporate ethics programs and just introduced what it calls Sea Change, a program to get big companies to pursue environmentally sound growth.

"We don't think it's productive to just say society is wrong," said John J. Castellani, the roundtable's president. "A lot of pain and suffering has come from business's wrongdoing, and we must again foster trust."

Business has faced similar problems in the past. Theodore Roosevelt was following popular sentiment when he sought to break up cartels at the start of the 20th century. College students in the 1960's ran Dow Chemical's recruiters off campus, furious that Dow's napalm was used on villages in Vietnam. The term "military-industrial complex" - rarely used in a flattering way - has been around for 44 years.

But these days, even institutional investors no longer give corporate executives the benefit of the doubt. "We're operating in a caveat emptor world, one in which you have to check everything that management tells you against what else you know and hear," said William Riegel, a managing director of TIAA-CREF, the huge teachers' pension fund that commissioned the Roper poll.

But why the rampant distrust?

Some executives concede that business brought the opprobrium on itself. "Today's companies are run not by entrepreneurs, but by traders who are increasingly preoccupied with short-term gain and profits," said Henry B. Schacht, the former chief executive of both Cummins and Lucent Technologies. (Mr. Schacht serves on the board of The New York Times Company.)

But others say that middle-class Americans are seeking villains to blame for their losses in the stock market implosion of 2000, and for the high oil and gas prices today.

"John Q. Public was burned, and asked, 'Where were the directors and external auditors?' " said Dennis M. Nally, chairman of PricewaterhouseCoopers. "The trust equation was broken."

Others point out that the gap between the income of the top 10 to 20 percent and the rest of the work force keeps widening.

"There's always been a tendency to dislike the big guy, and it has been intensified by concerns over global competition and the widening gap between the winners and the losers," said Henry M. Paulson Jr., chairman of the Goldman Sachs Group.

Technology has given the angry voices a more public outlet. The blogosphere is rife with postings castigating Coca-Cola, Wal-Mart and other big companies, citing everything from unfair labor practices to dangerous smokestack emissions.

Hollywood has long recognized that portraying sleazy business executives as bad guys is a crowd-pleaser. Michael Douglas won an Oscar in 1987 for his portrayal of a consummate greedy trader, Gordon Gekko, in the film "Wall Street."

Today, though, unscrupulous businesspeople are practically stock characters in movies. "You have to be so politically correct that the only guy you can safely portray as a villain is a business guy in a suit," Dr. Hammer, the consultant, said.

That is not entirely true, of course. Terrorists and crooked athletes show up in movies, too. And top actors and athletes have been plagued with their own scandals regarding substance abuse, behavioral tantrums and swollen paychecks.

But, experts say, when actors and athletes stop delivering huge box-office returns or home runs, their paychecks plummet. In contrast, "there is a real perception that we continue to pay for failure," Mr. Castellani of the Business Roundtable said.

Still, many executives insist that society must share blame for the business practices it so despises. They say that people who blame McDonald's for their obesity still order the large fries, and that those who complain about low wages still insist on low prices.

That certainly is Wal-Mart's take on it. Mona Williams, vice president for communications, said Wal-Mart's own surveys, done at the behest of board members worried about the company's image, indicated that only 8 percent of consumers refused to shop at Wal-Mart because they were opposed to its practices.

"The people who criticize us most do not have a Wal-Mart in their town, and can afford to shop elsewhere anyway," Ms. Williams said.

Even so, businesses like Wal-Mart are actively trying to regain public trust. Wal-Mart has set up an office of diversity, has added environmental safeguards to many stores and has fired managers who abused workers.

Mr. Miller, the Delphi chief, cut his own salary to $1 this year and is not partaking in bonuses allocated for the top executives when Delphi emerges from bankruptcy. The reason, he said, is so that he "could look Delphi's hard-working people in the eye when I tell them that they have to tighten their belts."

And many companies are disclosing even more financial information than tightened laws require. Eastman Kodak erroneously listed an $11 million severance cost in its second-quarter earnings. No money had changed hands, so Kodak added the amount back into its third-quarter earnings, a move its accountants remain certain was permissible under existing rules.

Kodak restated earnings for both quarters anyway. When asked why, Robert H. Brust, Kodak's chief financial officer, cited a "heightened sensitivity" about financial reporting and a desire to adhere to the "spirit" of regulatory change.

Experts say such moves may help, but doubt that they will pull people back into industry's corner.

"Executives seem to believe that they will be O.K. as long as people want the products they make," said Rosabeth Moss Kanter, a professor at Harvard Business School. "Well, Big Tobacco used to say, 'We're satisfying demand,' too. Look how far it got them."